We are starting to learn that Mondays are the slow days in Spain – although the tourist sights are open, many restaurants are closed and the pace is much slower.  Mike & I headed out early to the city this morning on our own to allow Mike some photo ops.

Every corner you turn on every walk we take brings another spectacular building with beautiful detail and incredible craftsmanship.  While most buildings are older, even the new buildings have a style we are not accustomed to in North America.  Even the lamp posts – which are quite new – are thoughtfully designed and integrated with the environment.

I had the classic Spanish breakfast – cafe con leche with tomato tostado (Mike is off of gluten so has to skip the bread) sitting across from the Seville Cathedral which is the 3rd largest in the world and the largest Gothic one in the world.  We took a walk past the cathedral but knowing we were meeting up with Marucia and GL we travelled on past to return later.

We headed to the Santa Maria Luisa Park which took us past many more inspring buildings.  We crossed through the university, museum, and an old theatre (now a casino) before getting to the park.  We also passed the Torre del Oro which is a 12th century Muslim tower which protected the city along side the Guadalquivir river which runs through Seville from the Mediterranean – it is placed at the spot furthers up the river where navigation from the sea is possible.  It is now a marine museum (which we later visited).

In the late 1880’s one of the infantas donated the land to the city which became Santa Maria Luisa Park.
In the early 1910’s, the south end of Seville was rejuvenated in preparation for the Iberia-American exposition of 1918.
A massive Plaza de Seville was built at the one end of the 1/2 mile long park.  Every province of Spain sponsored a tile panel around the massive semi-circular building – with a fountain the centre and a moat encircling the inside semi circle of the building.  There are large towers at either end a central tower all joined by a 3 story building.
Today they are primarly in use as office spaces, so you are not able to tour inside of the buildings – but you can see from the photos here that the exterior is still well maintained and impressive.

Although we did not have time to walk through the rest of the park, it is full of horticultural gardens complete with green parrots in the orange garden.

So off to our 2nd stop. We had thought of perhaps doing Cordoba on the way, but as it is Sunday much stuff is closed – and it is a fairly long drive, so we headed straight there.  And just as well given the chaos when we got there….! 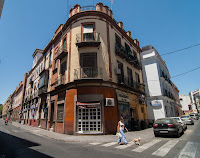 Got to Sevilla in good time and snagged ourselves what seemed an ideal parking spot outside the next place. But despite having called her ahead and waiting for quite some time, still no show of the owner.

So called her back up and let her know we were going for a cerveza and would be back in 1/2 hour or so.  Marucia and I returned, but still no Rosa.  And then for some reason, I double checked that we were in fact at the right address….

Well google is just too good at trying to correct you sometimes I think. I had found MalaKer on google – the name of the house – when I really wanted 23 MalaVer.  Coincidentally both were # 23 and had no # on the building – so Marucia’s comment on the phone that there was no # did not register that we may be at the wrong spot for Rosa. 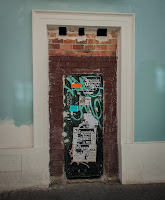 So off Marucia and I went on the search for the real residence – a quest which had us stop and ask for directions about 5 times (thank goodness Marucia speaks Spanish!)- everyone circling us in closer each time.
And every set of directions was centric around churches;  go to the first church, turn left, pass 2 churches then turn right etc.   From the first request we sounded very close – but an hour later and rather overheated, hungry and sweaty we finally arrived.  Rosa was an angel and she and her husband drove us back to Mike & GL and even drove our car back to the new place – and it is wonderful – very tastefully done and well appointed.

On our adventure, Marucia and I had walked past the Parasol – an intriguing new architectural addition to the local market square which Mike & I had just seen on TV a couple of weeks prior to heading to Spain.

So once we settled in, we headed back to the square to see about getting something to eat.

Rosa gave us the local scoop on where the best Cervezaria is (beer bar), and what wine to drink.  The locals don’t drink red around her (although that didn’t stop us from stocking up on some from the local shop).  The white wine to drink is a barbidillo – nothing like the vino verde of Portugal, and can’t say I’m a huge fan.

And as always, Michael finds interesting theme items to photograph.  He found the posters around Seville quite intriguing. 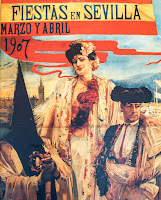 Although we walked pretty much everywhere, bike rental was a very viable option – all the major cities in Spain had the bike rental stations commonly spread through the city.  We saw lots of usage of the bikes – and as you can see there were bikes available, but also there are empty spots showing they do get used. 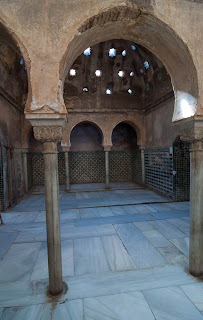 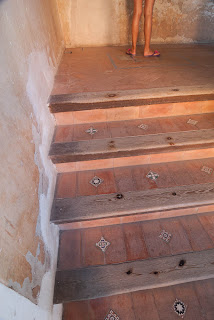 Most of the buildings in Alhambra are Islamic, but some Christian buildings exist. Many of the buildings were cordoned off, but books in the bookstore show photos of rooms which have much of the original plaster and tile and colour in place – it must have been incredible! 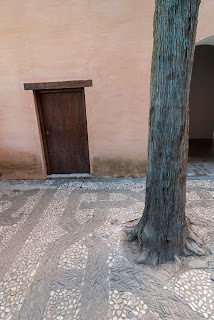 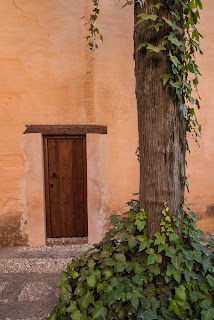 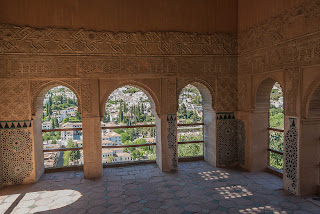 The room of secrets was inside double nested walls and when standing in the very center you could not hear what was being spoken in the corners.  But the person in the opposite corner could hear you very clearly!  They really loved their scientific discoveries. 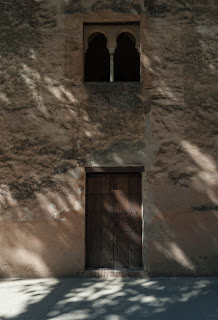 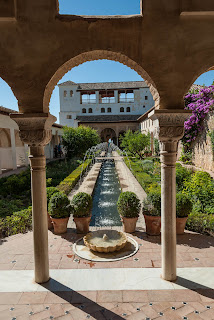 We sauntered through the aromatic fountains and gardens and trees of Alhambra over to Generalife – the “closer to God” escape for the original Muslim residents.
Here the gardens and fountains were the focus and extremely elaborate.  Roses and Orange trees were imported.  The walkways are full of fountains, labyrinths, yew archways and many other flora extravagances. 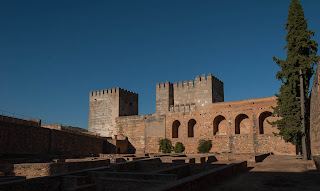 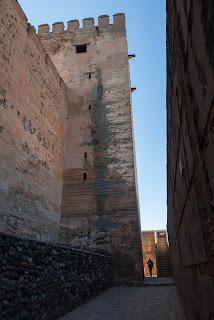 By 7:30pm were were climbing the final tower of Alhambra and although still very much daylight, the lighting was getting better for photo taking as we closed the visiting hours. 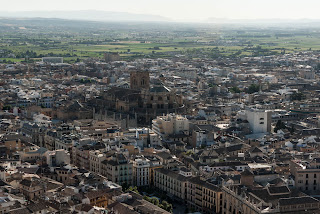 views here from the top of Alhambra down over Granada 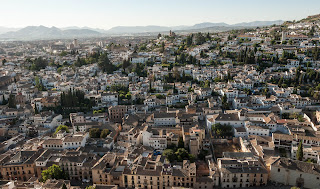 Almost every building has one (or more) tiles with either a unique design or inscription.  I’d love to do one on our own house if we do end up building! 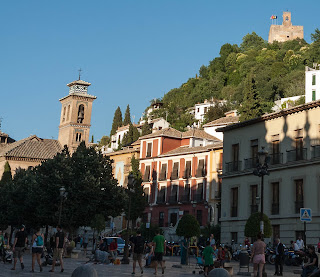 Back at the bottom main square looking up at Alhambra (that’s the tower I was on doing the Titanic scene above).  We ate a couple of meals in the main plaza here. 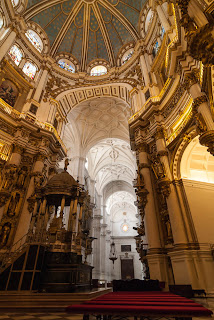 Woke up later the next day (hopefully catching up from the jet lag).  Caught a bus to the Granada Cathedral – wow. 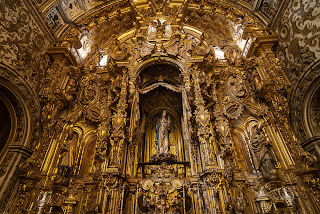 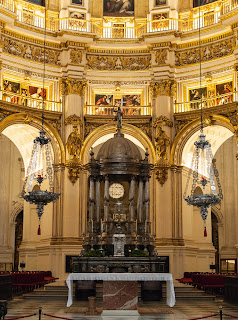 The cathedral was built at the height of Spanish domination of South America – and they were showing it off.  Endless cupolas and chapels all around the edges – each with more ornate displays than the last it seemed. 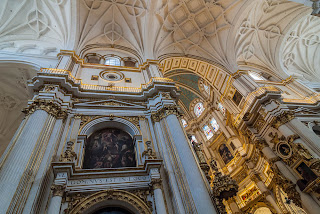 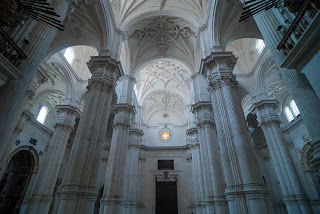 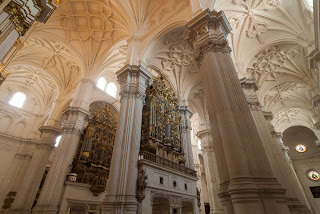 Marucia was intrigued by the dual organs (below) and I agree that it would be ideal to hear them being played as you were walking around.  They would bring the space alive.

Not photo’d here, but G.L. found some Gregorian chant books in the back section which were very interesting as they pre-dated modern musical notation.  Their notation represented the musical scale, but not the duration of the notes (tempo).  The notes were squares and diamonds vs. circles and rings. They were spread out across the page, so I thought perhaps that was a way of representing the tempo, but G.L. pointed out that this was merely due to filling the space between the accompanying text. 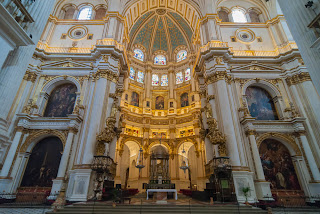 We were kicked out at 1:30 for closing, so went to off to find our cerveza and tapas. 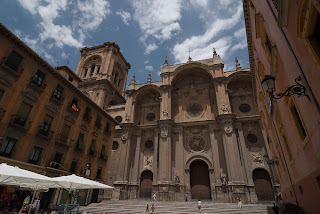 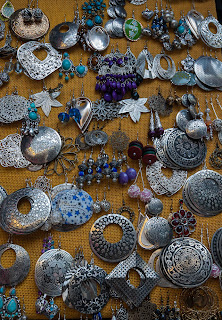 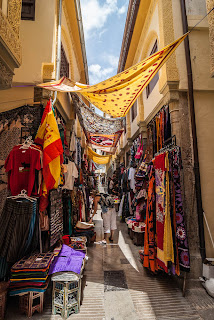 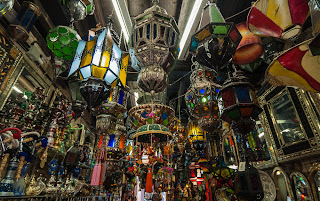 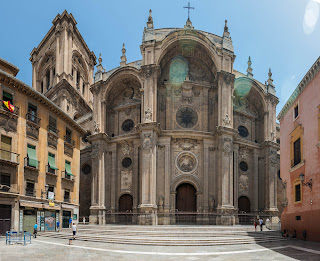 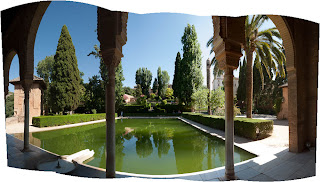 Once downtown, George was easily able to fill his prescriptions and after a “breakfast” of sorts we managed to get our SIM cards at MovieStar. There are LOTS of good buys for clothing and shoes – having to resist the urge!!! Next we found a 2nd tourist info – this one was a Granada specific centre and they were very helpful. Despite having a ticket reservation, we needed to pick up the actual tickets in advance or at the gate – by picking up in town we save the line up at Alhambra. So after a cerveza, we headed up for our tour which was at 4 (grounds access from 2 -8).

This fountain was on our walk up to the Alhambra

Once in the grounds, we saw the moorish baths first. Although Michael did not take many photos of the gardens and fountains around, there is water everywhere – an amazingly it is all gravity fed from the mountains in an elaborate series of tunnels, channels, fountains, pools and more – quite an amazing feat. But the buildings all around capture your imagination even more – hence the photos of them.

The Alhambra itself was awe inspiring – simple wood and plaster construction but elaborately complex detail everywhere.

The ceilings, floors, walls and all around are full of arches with minute detail on everything. The painting has mostly all faded now, but flashes of the original colour sometimes appear – blues, reds and gold were likely everywhere.

See the full gallery on Posterous

Sitting in to airport waiting to head to Spain via Frankfurt.

After picking up our luggage and car no problem, I was elected to drive the first stint. After only a couple of close calls and ticking off a few Spanish drivers, we managed to get to our Granadan residence. Herminia met us after we were walked to the home by a local woman who was extremely helpful – and even she did not know where our street was!

After getting to bed by about 10:30pm after a very long day, we did not manage to get out till about 10am the next morning to catch the bus into town.

The photos here are taken by Michael around and about our accommodation.