Off to the grey hound races this week. Perhaps Ranger (the Ilderspoons dog) will appreciate these photos more – just dogs running as fast as they can, no water involved – more his taste perhaps 🙂

Only placed one bet on the night – on Pretty Nina. Her stats weren’t great, but given her name I had to place a bet! 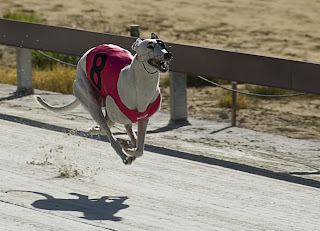 The ‘rabbit’ they chased around was actually covered with a

koala looking thing – although I’m sure the dogs would be quite disappointed if they ever managed to capture it. 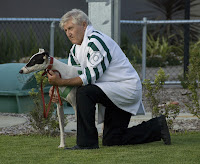 Interesting seeing the dogs as they ‘psych’ up for the race – some are very calm (like the one in the photo here), while others are bouncing around and the trainers can barely keep them off the track.

At any rate, next time we’ll have to book a dinner reservation in advance to make sure we get a spot in the air conditioned section – sitting in the baking sun to eat dinner was not ideal (but I’m not complaining…..!) 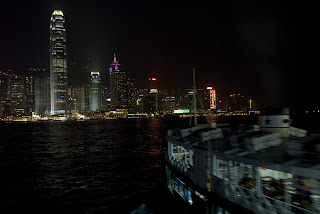 One last photo to end with – a remnant from Hong Kong – lights of the city as we took the ferry back across to catch the train to the airport.

Made our first trip down to South W

estern Australia. We’ll definitely be going back for more! Lots to see & do. We drove down early Saturday morning and started in Bussleton. The day was a bit overcast and as we’ve come to expect, very WINDY. 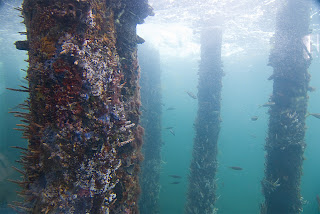 Started the day with a visit to Bussleton Jetty. Almost 2 km long, it is the longest wooden jetty in the southern

hemisphere. If you open the photo on the top right, you still cannot make out the end of the pier! It was used until 1972, and has had sections 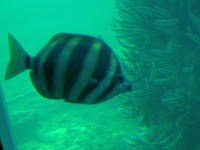 destroyed by cyclones and fires – 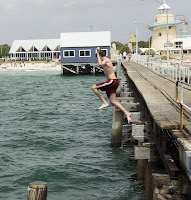 restoration is ongoing. At the end of the pier is an 8 metre deep underwater observatory. Schools of yellow tails and herring along with several reef fish are common around the pier – the photos cannot capture the colours or subtlety of the fish and corals. Along the pier, people were swimming, fishing and even a couple of divers off of nearby boats. Kyle could not resist jumping in on the walk back. Also visited a local candy shop and a wine outlet.

And on Saturday evening we finally spotted our first wild roos!! (we have 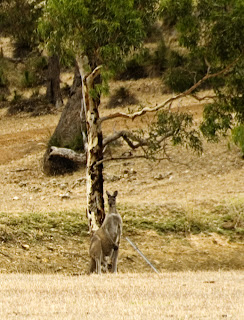 seen several dead on the road side, but they don’t really count).

Took a walk along the beach in Eagle

Bay for the evening. Beautiful white sand and granite rock. Lots of crabs in those rocks – Kyle is anxious to catch and gobble some up! 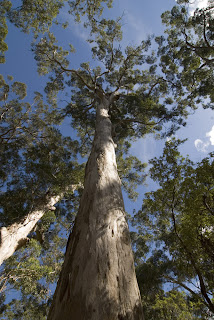 Had a great dinner at a local Thai restaurant where our waiter ‘borrowed’ some of the appetizers from a party group for us – well, they were letting them go to waste, so he figured we may as well put them to good use! Fun time… 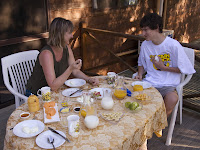 Stayed at a very nice B&B in Dunsborough on Saturday night where our hostess was a bit of an animal lover – chickens and dogs in the back, and she nurses ringtail possums back to health also! Had a nice breakfast on the deck with fresh figs from the garden.
Decided to visit a cave, taste some 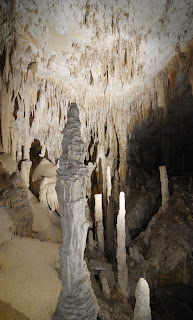 The trees are noticibly different here – airy, smooth bark and often with burns around them due to the common fires.

We visited Mammoth cave – named for the size. Incredible stalactites and stalagmites (cave decorations as they were refered to). There were calcite deposits on the decorations at one end of the cave – which glisten in

the light. The cave was 10 stories high – lots of sections collapsed also (although we were assured that no sections were about to cave in on us…..).

All in all a great weekend – and still lots to see (and taste!) in the area. 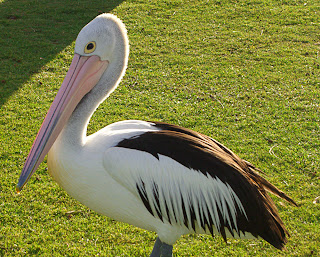 First date night in Oz. Nice walk along the waterfront in Mandurah and stopped for a coffee and sweetie. Bird scenery was a bit different. This fellow followed me around – should say waddled around after me – as a gull would in Ontario. And did you know,

The funny thing about the Pelican
is that his mouth can hold more than his belly can? 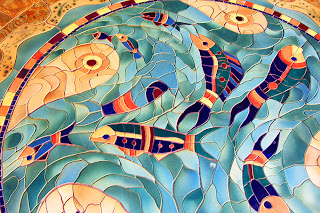 Very nice artwork along the waterfront including this mosaic.


It is now Wednesday evening and Mike & I are planning our April break activities. Had originally planned on doing Bali, but all booked up. So we will do our drive up the Western Coast in April, and hopefully pick up Bali in October. As we do our planning, Kyle is busy with his math homework. In Year 11 here he is taking 2 math courses – Calculus and Geometry & Discrete. Kyle has requested a photo of his homework tasks – save that for tomorrow 🙂

Mike is going golfing tomorrow with some of the teachers from school – time to buy some golf balls! Perhaps he’ll even get to see some ‘roos’ on the course. 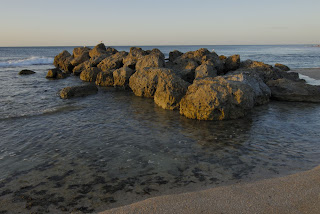 The lands of extremes eh? 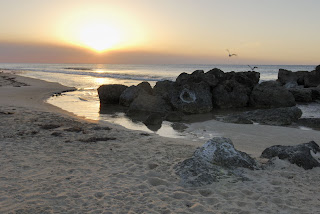 As you folks in Barrie / Canada dig out from the snow and defrost from the frigid temperatures, we are trying to stay cool. 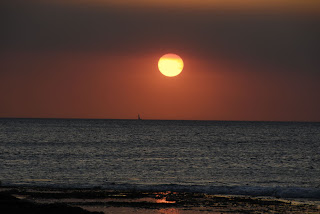 Sunset walks on the beach do the trick nicely. 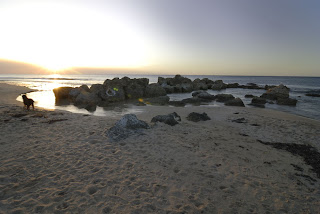 And this one is for Ranger 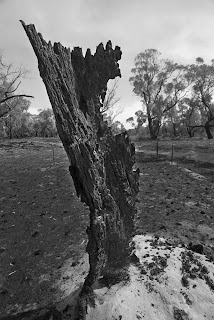 We returned from the beach today to discover that our power was out. It was due to a power transformer which was engulfed in flames from a fire north of Mandurah. There have been many local fires the past two weeks. Many have been started by vandals. A young teacher was killed as a result of the fires last night in her car as she tried to flee from her home (ironically her home escaped unscathed).
The photograph to the left I took this afternoon in a spot 3kms from home. The town of Dwellingup, some 45 kms from here, lost 6 homes last night. The high winds of WA help in spreading these fires. Power was restored here around 7:00pm, just in time for dinner. We have been having lots of lamb, since its about the cheapest meat around, and luckily we all enjoy it (we’ll see if that lasts)! 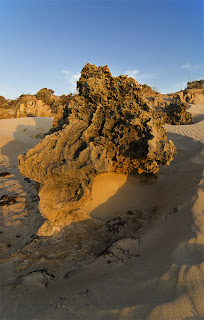 Off to the beach; sunny and 34C. Hope all is well in the great white north. 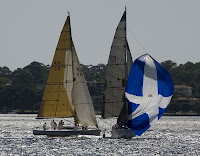 First of all – thanks to you folks who have sent replies – good to see the site is being visited!

must be over jet lag. Had a fun day – got to Perth ‘jetty’ just in time for the trip. Took the boat cruise out to Freemantle – about 1 1/2 hours. En route we passed the homes of the very wealthy. The one on the right was $55 million. Were thinking of picking it up, but we were about $55 million short.
Lots of sailing on the trip – this is where Australia claimed the 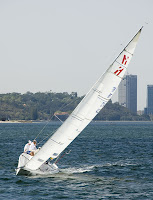 America Cup in 1983. That event triggered a major ‘fluff up’ of Freemantle to the tourist area it is now. Over 4,000 historic buildings in the town.

Next we had a tour around Freemantle on a tram car. All of this with several of the exchange teachers here in the area – and organized by Lindsay. He had been on exchange several years ago, and now organizes events for the exchangees – very nice of him and much appreciated!

On the tram ride, we stopped at a few spots for photo ops, and of

course Mike toddled off to take photos of local sites and a church, and the rest of the bus was left waiting for him, none of us knowing quite where he was…any way, got some decent shots 🙂

Ended the day back home with a walk on the beach and catch of the sunset out over the Indian Ocean. The rock formations along the beach are very neat – see photo.

Picked up an Aussie pizza for dinner – BBQ sauce and chicken – very yummy.
Met lots of great people today and will likely meet them again on the next outing. More to look forward to. 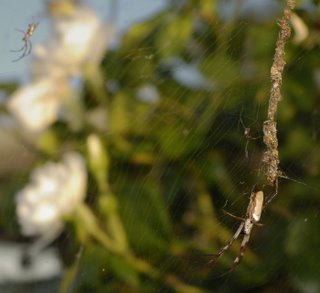 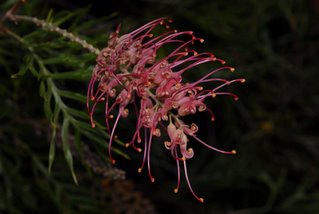 Its Friday night and we are just about to head out for Japanese cuisine. Its 40C and very hot. Lots of crawling things. 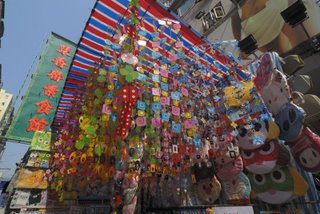 Its 11:20pm HK time and we have just spent a wonderful day with our host Simon. We have been up for 48 hours straight now so we are a little like walking zombies. Should be boarding our plane for Perth soon. 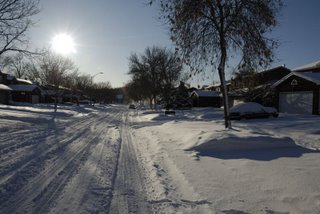 Many thanks to all family, friends, neighbours and co-workers. The past few weeks have been frantic, but you have all been very kind and supportive, (not to mention the generous gifts). Trees has settled in, and has even tried “winter” driving! Its 36C in Perth today, so we better get used to the heat quickly.